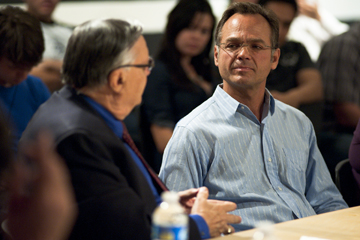 As a socially-engaged artist, Sale brings together often opposed constituencies of the criminal justice system from incarcerated men and women, to survivors/victims and their families, to correctional officers and elected officials, to community members, media, and activists. A somewhat quieter but no less political component of his work flirts with the fluid parameters of public and private love. He has developed partnerships with stakeholders spanning political positions from the far right – Sheriff Joe Arpaio – to the far left – Angela Davis. His aim is to soften and collapse boundaries, thereby encouraging reciprocal dialogue and mutual learning.

It’s not just black and white (2011) at ASU Art Museum wrestled with the visual motifs and clichés of crime (striped uniform, pink underwear, and even brown skin) that Arizona’s infamous Sheriff Joe Arpaio has manipulated for political advantage.

Working nationally, he organizes aesthetic frameworks for individuals directly affected by the system, connecting them with communities and initiating discourse around social justice. Sale has collaborated with men sentenced as juveniles to life without parole in Pennsylvania (Life is Life, 2011-12) and others on death row in Tennessee (Love for Love, 2013-14).

Sale is now undertaking a series of projects focused on the challenges of reentering society after incarceration. He recently completed Rap Sheet to Resume (2015-16), a workshop and social practice project for the New York-based Urban Justice Center and is currently producing Future IDs: reframing the narrative of re-entry (2016-present), with the Los Angeles-based Anti-Recidivism Coalition.

Based in Phoenix and in Los Angeles, Sale is Associate Professor of Intermedia and Public Practice at Arizona State University.